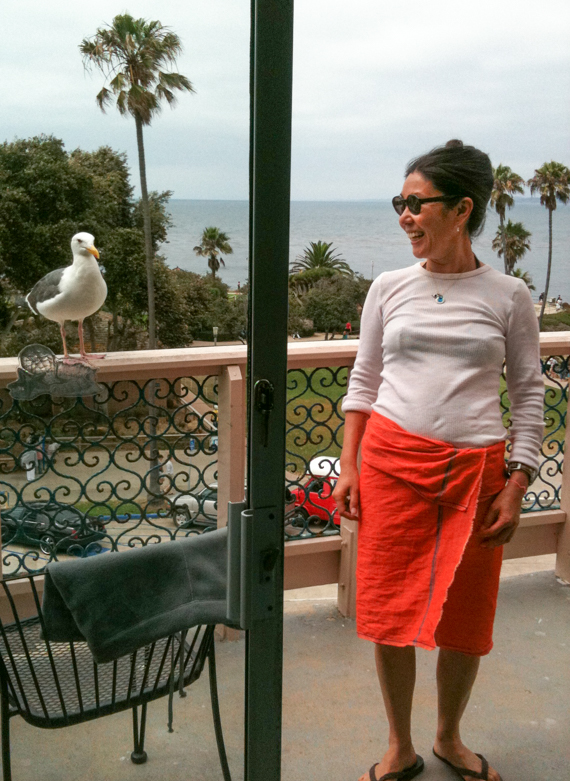 Saffron-colored cotton cloths worn by Hindu Sadhus, or holy ascetics, as a symbol of renunciation. The color resembles fire, alluding to the burning away of worldly attachments and desires. Sadhu towels readily bleed color in the wash as Christina accidentally discovered. This mishap led to the blush pink shades in our Spring Summer 2011 collections. Washing with Sadhu towels has since become an adopted practice at dosa for easily tinting cloth. 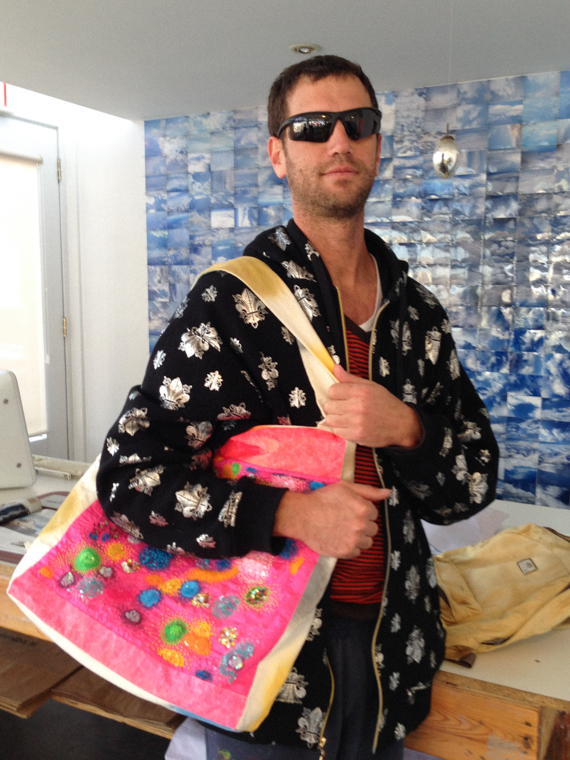 American artist, designer, and educator with degrees in Architecture and Religious Studies who lives and works in Marfa, Texas. In addition to many other varied works and mediums, Sam creates spray-painted postcards for which he offers a monthly subscription. Christina discovered the cards at the Marfa Book Company in 2012, which led to several collaborations including spray-painted coin purses, zip wallets, and luna bags. In 2015, Christina and Sam collaborated on a site-specific wall installation for “dosa at egg” in London using 1,215 individually spray-painted postcards that formed a color field of pinks. 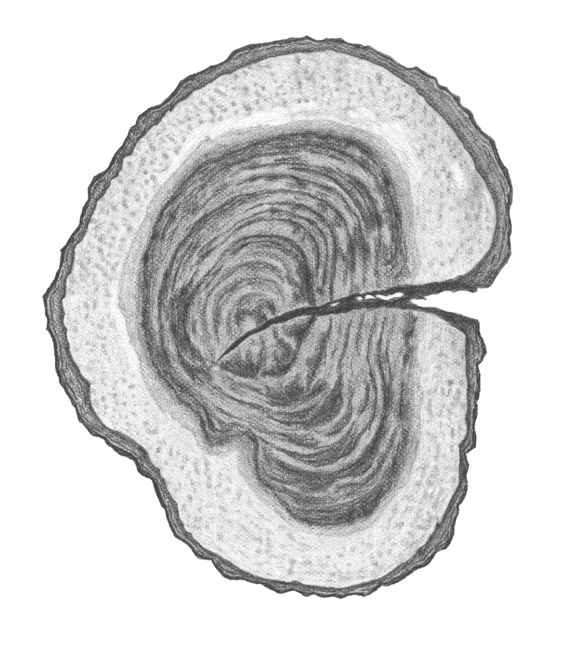 Natural dye derived from the heartwood of trees of the genus Caesalpinia. Sappanwood, also called Brazilwood, is high in tannins and gives a range of strong and warm reds, from deep crimson to subtle pinks. Manipulating pH levels of the dye bath will vary the color, from bright orange to blue red. Sappanwood was first mentioned in 1321 as a dye sourced from the East Indies and India. The dye is obtained from the sappanwood tree, an Asian tree grown on managed plantations. Nowhere is it found in the wild. In addition to producing dye, sappanwood is also a medicinal plant that posseses natural anti-bacterial properties. In India, we dye with sappanwood produced locally. Dyed fabrics are fast to washing but somewhat fugitive to light. 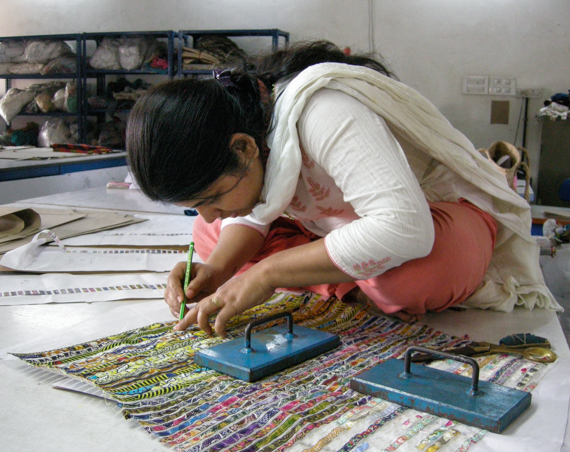 SEWA Trade Facilitation Centre (STFC), the commercial arm of the Self-Employed Women’s Association (SEWA). STFC was established in 2003 by more than 15,000 women artisans in the textiles and handicrafts sector as a bridge linking women artisans with national and global markets. It is headed by Reema Nanavaty, who also leads SEWA’s economic and rural development activities. SEWA is a trade union in India advocating for the rights and benefits of women. It is made up exclusively of women and stands as the largest single union in India. SEWA was founded by Ela R. Bhatt, a lawyer, social worker, and former chief of the women’s sector of the Textile Labour Association in Ahmedabad, Gujarat. Alarmed by the exploitative conditions women were subjected to, their slum dwellings, and high rate of illiteracy, Ela started SEWA as a grassroots campaign in 1972. Within three years, 7,000 women had joined, and as of 2008 membership had reached 966,139. The aim of SEWA is self-reliance through full employment. Members receive training, health care, childcare, financial services, and confidence derived from independence. The organization has set up 71 cooperatives of various trade groups to share and develop skills, expertise, tools, and techniques. In 2007, we started working with SEWA, first with our “mona’s milagros” recycling project and continuing to the present with production and manufacturing. 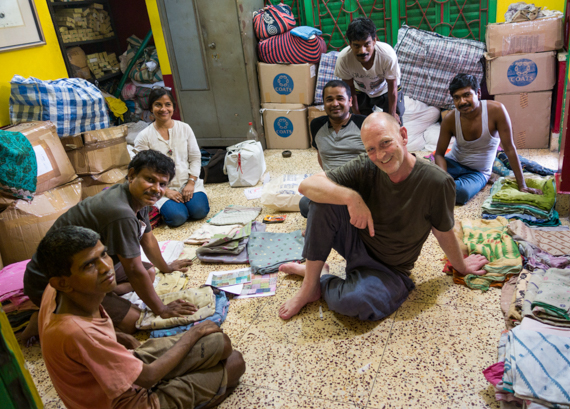 Charity in Kolkata helping homeless children with severe disabilities. Shuktara was founded in 1999 by David Earp, a former textile dealer from London’s Portobello Road who spent years sourcing fabrics in India. Compelled to help disabled children abandoned at Kolkata’s Howrah train station, David moved to India and founded Shuktara in July 1999. From the early days of having no support and little financial help, Shuktara has gone on to open two homes and has built an amazing team who work with the young people, many of whom will stay at Shuktara their entire lives.

David’s textile work continues alongside and in support of his charity. To raise funds, he designs one-of-a-kind kantha shawls. In 2007, we started donating our fabric remnants to David, which he mixes with locally sourced used saris to compose into new patchworks. David works with a group of women outside Kolkata who quilt and sew by hand using the traditional kantha stitch.  See also kantha, quilting 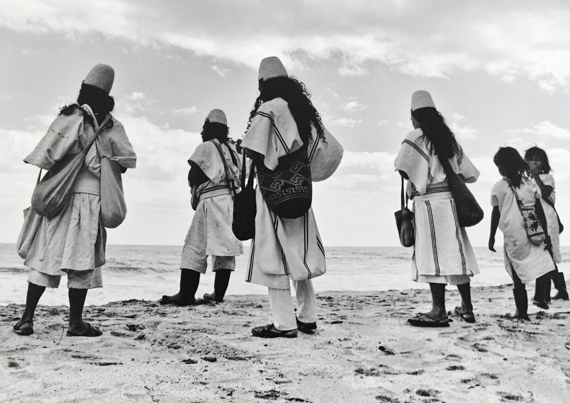 A white cotton bag made by the Arhuacos, one of four isolated tribes living in the Sierra Nevada de Santa Marta of Colombia, the world’s highest coastal mountain range. Rarer than wool mochilas, ours are made of 100% organic cotton that has been grown, harvested, and spun by the Arhuacos, whose men are distinguished by the conical white hat that represents white mountain peaks. Mochilas are handmade using a long needle. The strap is made by the sprang technique, a kind of plaiting done with one continuous thread. Ours are crafted by Tejer, an association of 60 Arhuaco women whose main goal is to protect and to preserve their ancestral art of weaving. The white, all-cotton mochilas are, for Christina, the culmination of a 25-year long search.

In addition to being a practical artifact for everyday use, the mochila bears tremendous spiritual weight. The Arhuacos follow the 5000-year old tradition of Aluna, or Great Mother, the force behind nature. They consider the Sierra as the heart of the world, the place in which everything is interconnected. Cotton seeds are blessed to Aluna before planting, and rituals are offered to nature before harvesting. Thread represents time. The day is divided between positive (morning) and negative time (afternoon and evening). Daily activities are thoughtfully arranged to balance positive and negative, the spiritual and material aspects of life. Following this philosophy, women make their mochilas in the morning with the intent of transmitting all of Mother Nature’s energy into the thread. 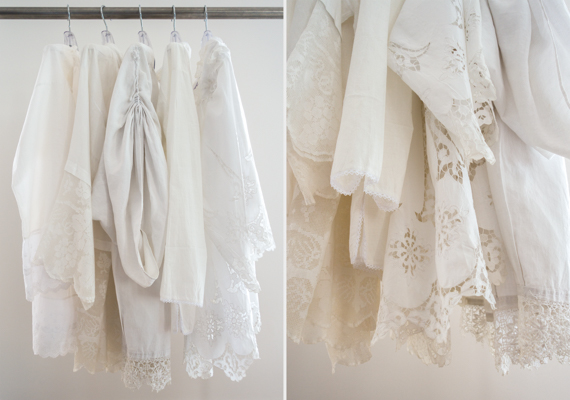 A loose-fitting, white ecclesiastical vestment usually of knee length with large open sleeves. Reminiscent of an artist’s smock, the surplice is a staple dosa shape, continually reinterpreted. Christina’s collection of vintage pieces, which we sometimes refer to as cassocks, was started in the late 1970s. Among her great finds is a group of Vatican religious vestments discovered at a Los Angeles gift show in 2004. According to the seller, they were brought over from Italy by her uncle, who operated a lavanderia next to the Vatican.